The Cardinal Foundation exists to support the mission of Gadsden State Community College and provide opportunities for students.

The Cardinal Foundation is an approved IRS 501(c)(3) support organization established to raise, manage, distribute and steward private resources to support the mission of Gadsden State. The Foundation is managed and controlled by a Board of Directors.

Donations are easy with PayPal, or donations can be sent to:

The Swoop Sprint 5K is a family-friendly scholarship fundraiser hosted by Gadsden State and the Gadsden State Cardinal Foundation. The purpose of the event is to raise money for student scholarships. It is a Gadsden Runners Club Prix Event. The event was cancelled for 2020. The 2021 race date is TBA.

You can also fill out a registration form to register for the race. Click here for the form.

Thank you to these dedicated sponsors of the 2020 Swoop Sprint! 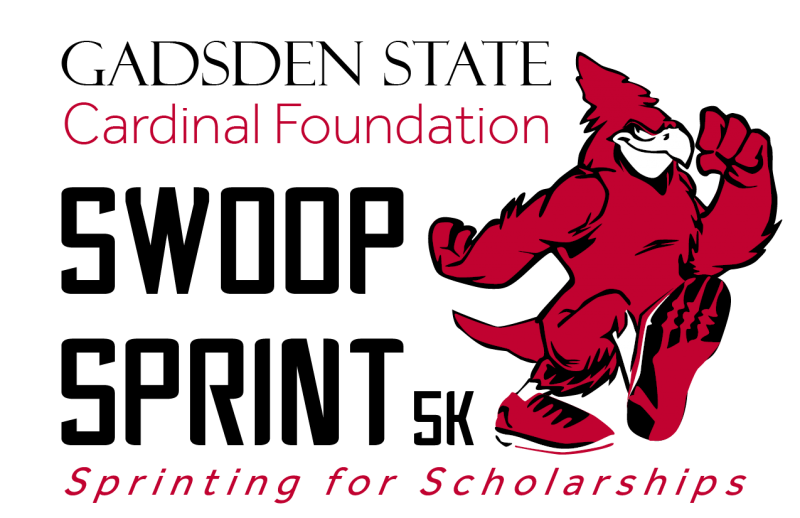 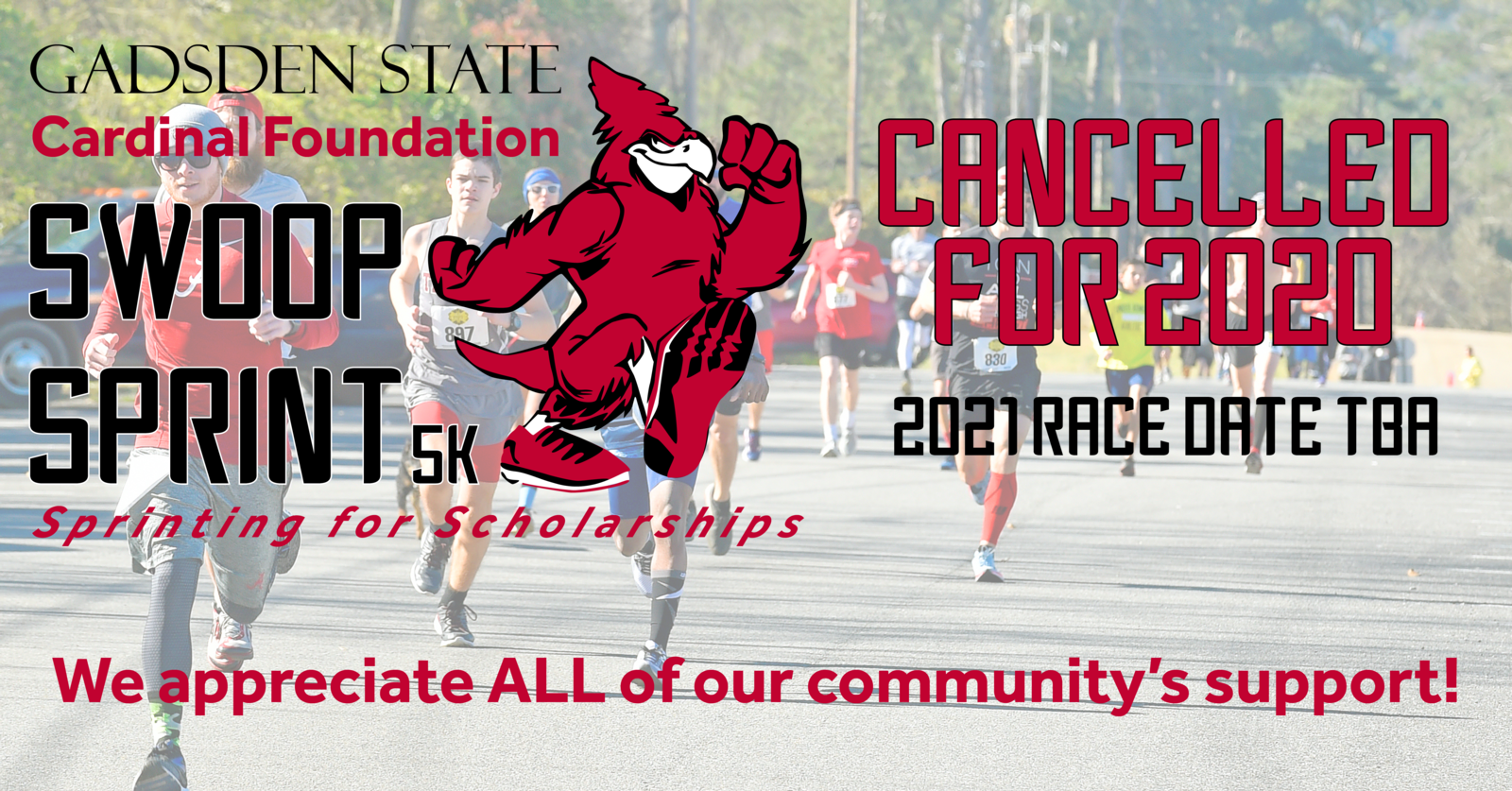 For the past four years, the Cardinal Foundation has sponsored the Gadsden State Everyday Hero Awards held during Community College Month in April. The event recognizes five deserving heroes who make a difference in the lives of other. Winners are from Etowah, Calhoun and Cherokee counties. They are honored with a short speech by the person who nominated them for the award, a breakfast attended by family and friends and a framed and matted certificate.

Nominations for the 2020 Everyday Hero Awards will open in March 2020. Applications will be available on the Cardinal Foundation webpage. 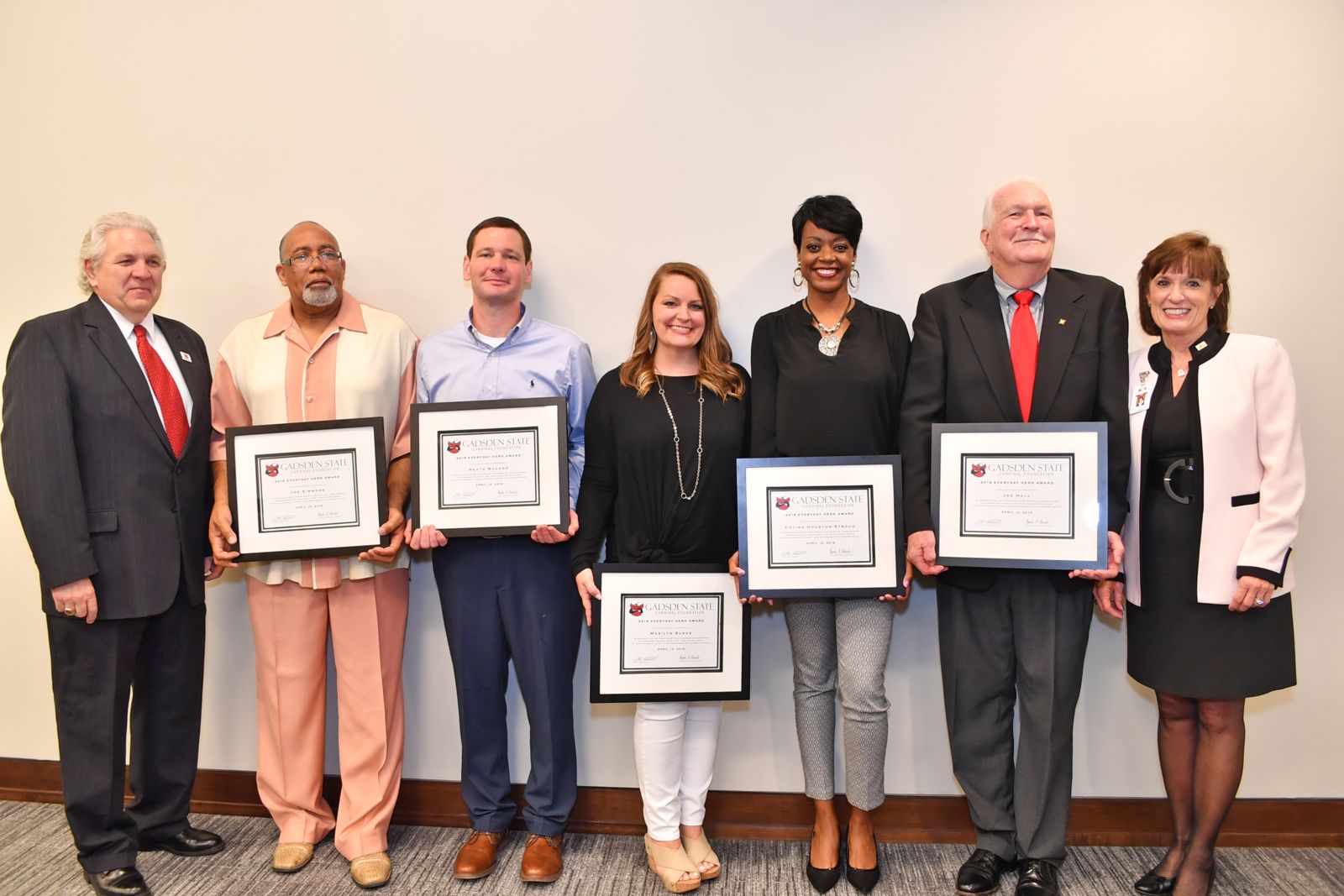 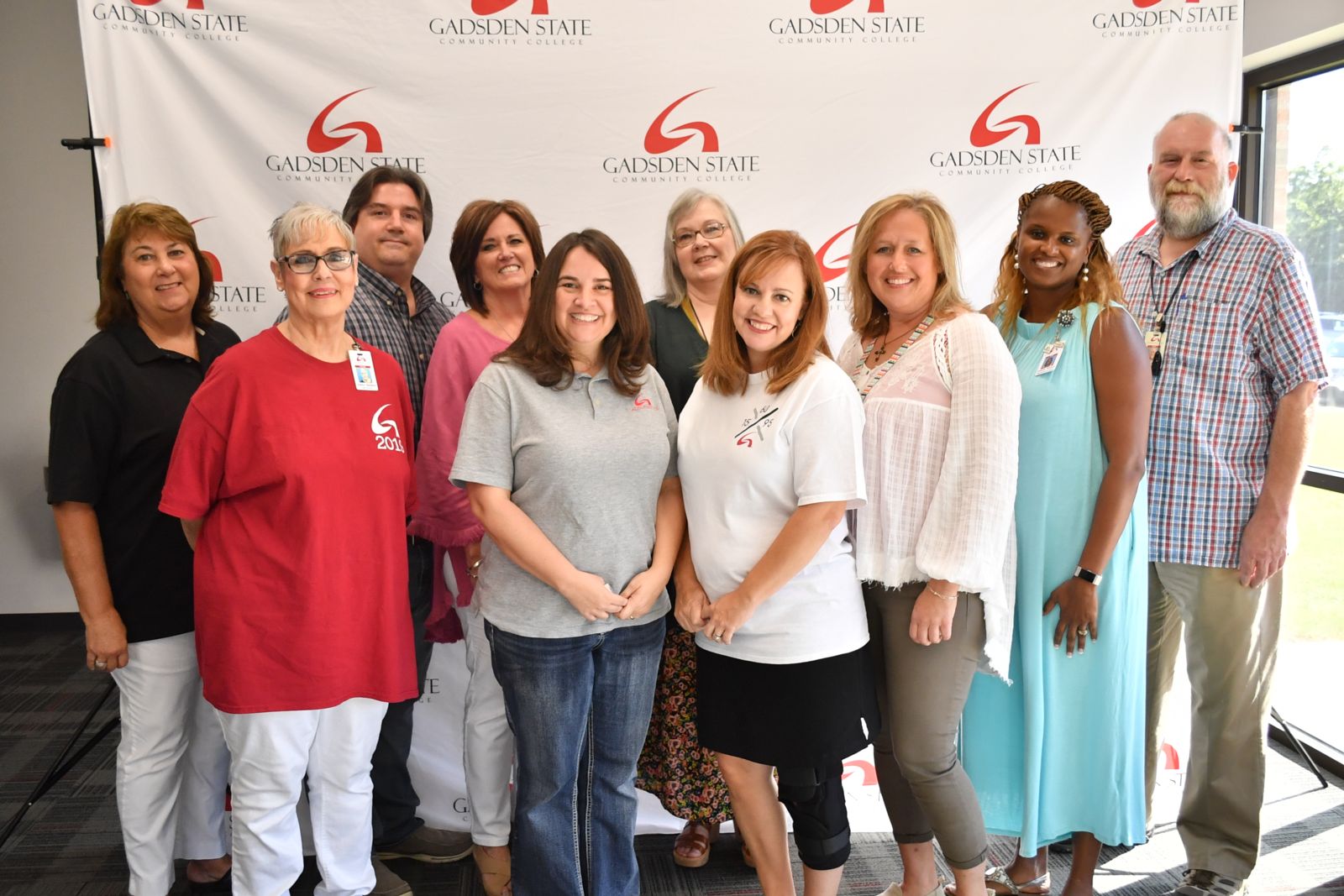 The Cardinal Foundation purchases service pins that are given to Gadsden State faculty and staff celebrating milestone service anniversaries. The pins are presented during Fall Convocation each year. 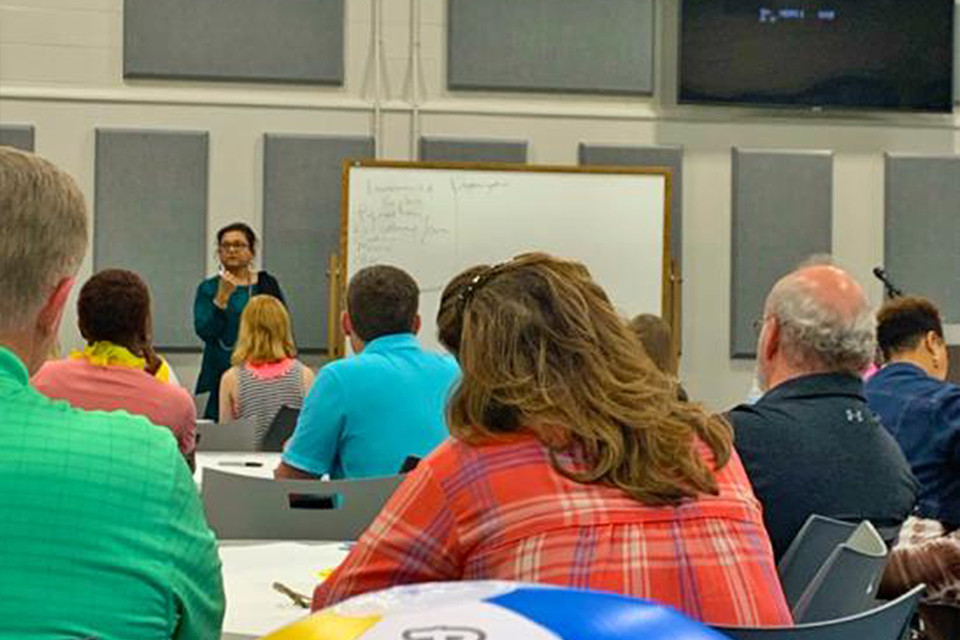 Nanda Patel, a board member and the owner of Holiday Inn Express in Gadsden and Fort Payne, spoke at Gadsden State’s 2019 professional development workshop. She explained her perspectives on customer service. 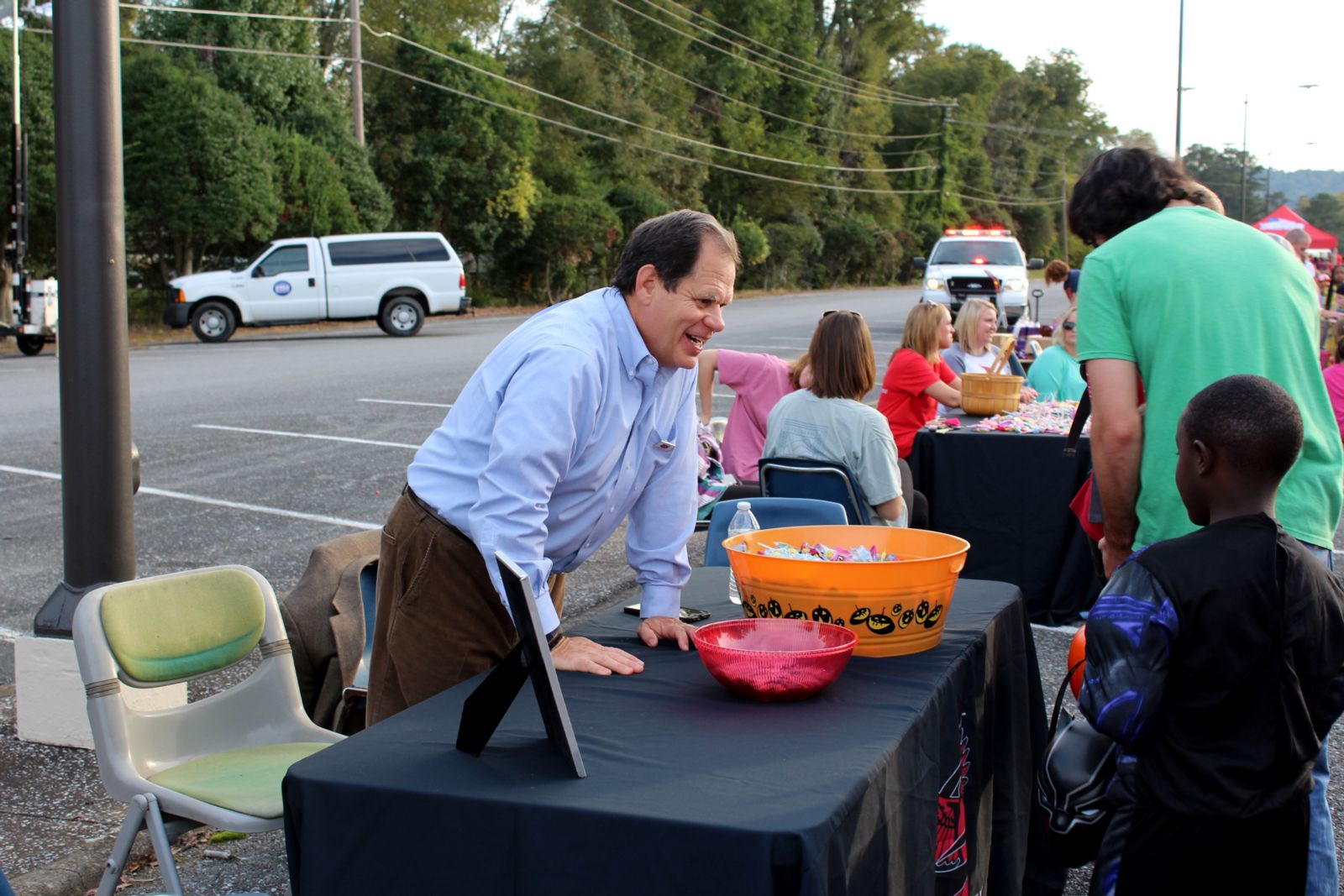 Mark Condra, a board member, speaks with the community at Gadsden State's 2018 Candy with the Cardinals on the Wallace Drive Campus. 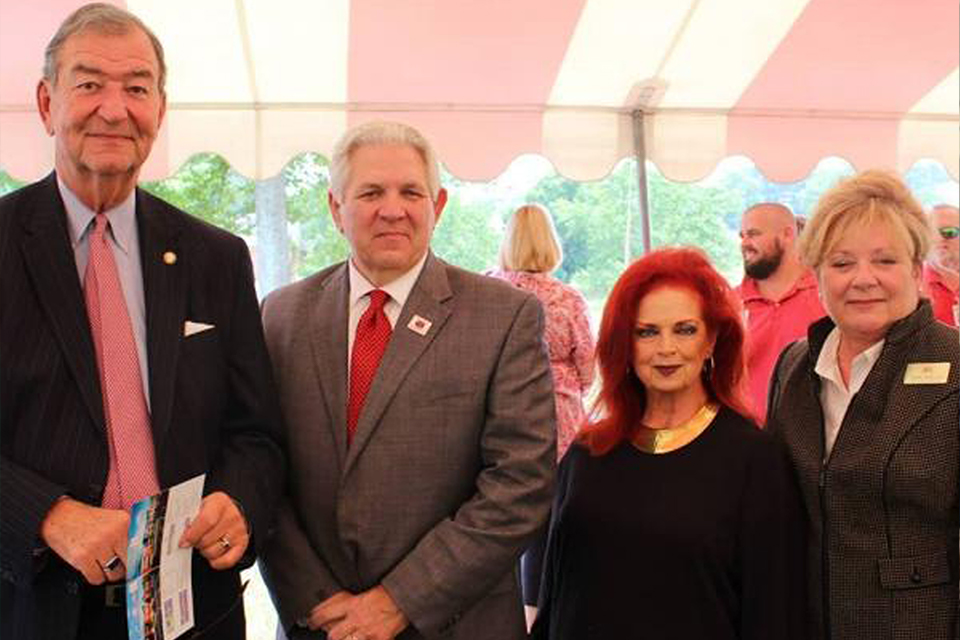 Cardinal Foundation board members, from left, Judge Bobby Junkins, Steve Hildebrant and Lynn Hawkins-King participated in the groundbreaking for the new Science Building located on the East Broad Campus. They are pictured with Dr. Teresa Rhea, dean of Recruitment and Retention. 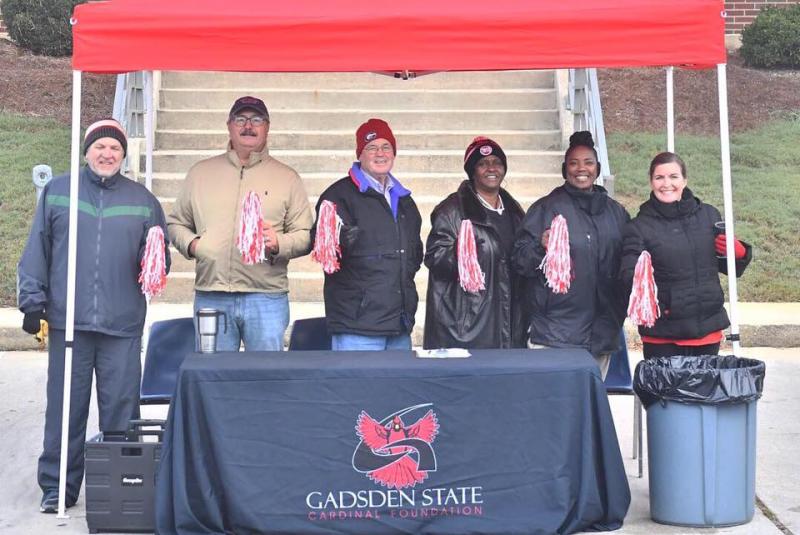 The Cardinal Foundation hosted a water station during the inaugural City of Champions Half-Marathon in November 2018. Board members, from left, Steve Hildebrant, Glen Porter and Larry Guffey were assisted by Gadsden State employees Kathy Brown, Tracy Heard and Jackie Edmondson.

The Alabama Homebuilders Construction Scholarship is a $600 scholarship to a student enrolled in the carpentry program. Hudson Howle of Rainbow City is the scholarship recipient. Howle is the son of Susan Howle. He plans to graduate in the summer 2022. 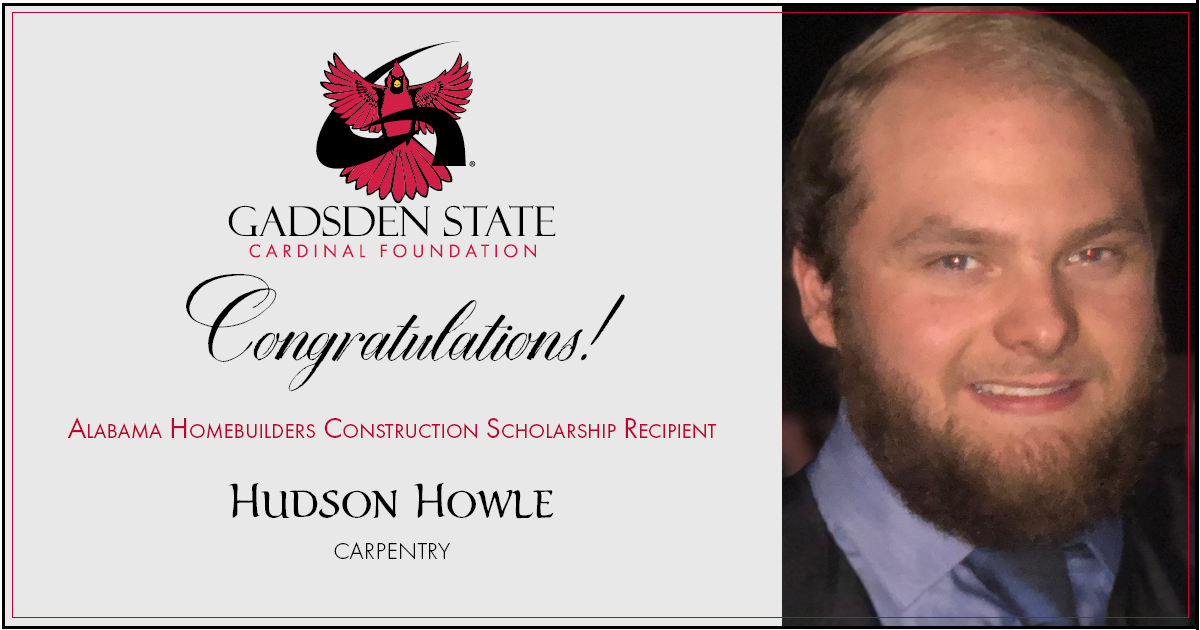 The Benjamin Steinberg scholarship is a $500 scholarship to a student enrolled in the nursing program. This year’s recipient is Kylie Grimmett of Rainbow City. Grimmett’s parents are Audrey Michelle Lowery and Keno Versha Grimmett. She plans to graduate in the summer 2022. 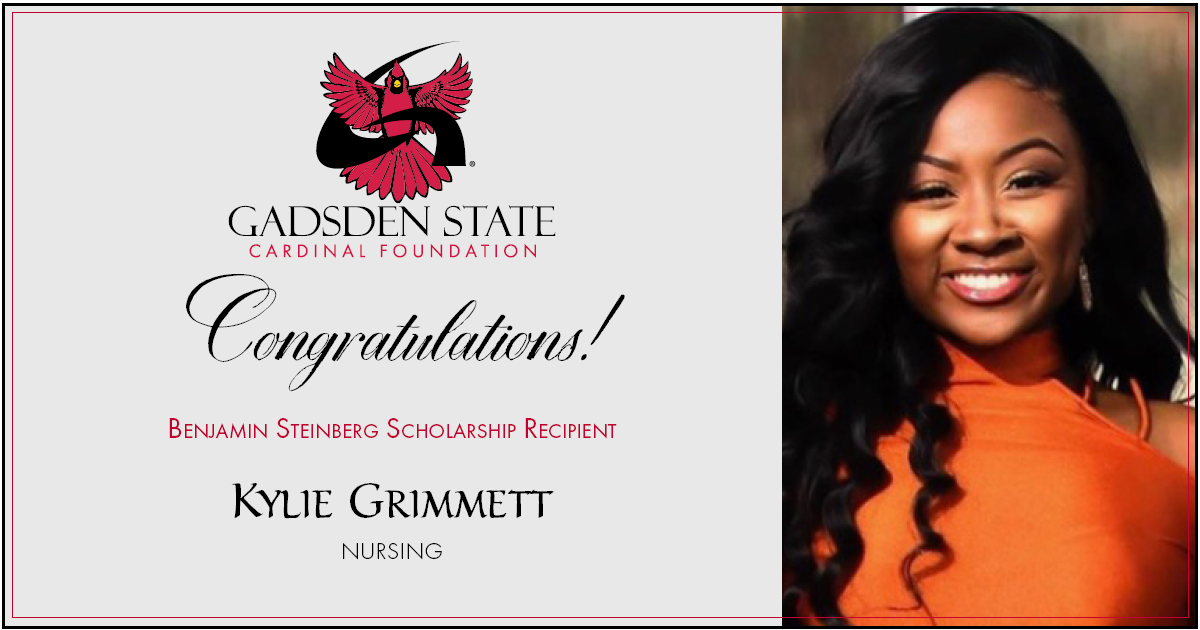 The Gadsden State Cardinal Foundation awarded Maribel Perez of Sardis City with the Cardinals Who Give scholarship. This scholarship is worth $1,500 and is to assist with tuition, books and fees. Perez is pursuing a diagnostic medical sonography degree and will graduate in December 2021. 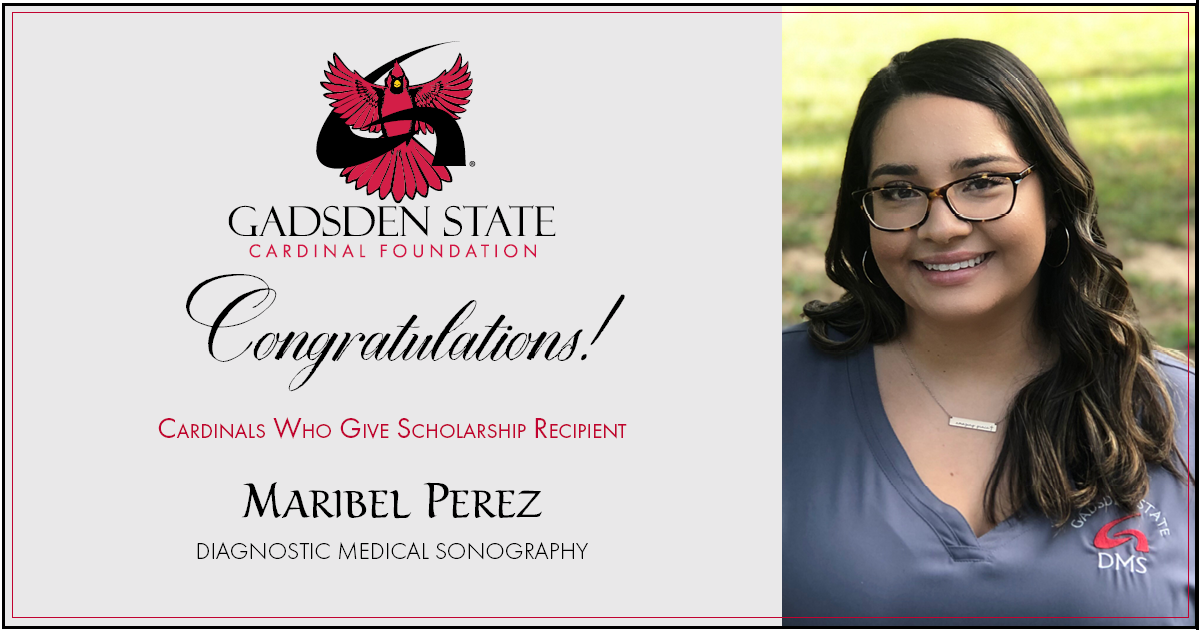 The second recipient of the Cardinals Who Give scholarship is Serena Knight of Gadsden. She is the daughter of Kimberly Knight. She is majoring in general studies. After graduation, Knight plans to transfer to The University of Alabama in Huntsville to major in nursing. Knight’s career goal is to become a nurse anesthetist.

The Gerald Acker Scholarship is given to an incoming Gadsden State student enrolled in the electronic technology program. This scholarship is $2,000 and is awarded to Christopher Boyd of Anniston. Boyd is the son of Michael Boyd and Geraldine Lawerence and the father to Crystal Barner, 19, and Alivia Boyd, 9. Boyd will graduate in 2022 and hopes to work for a power company. 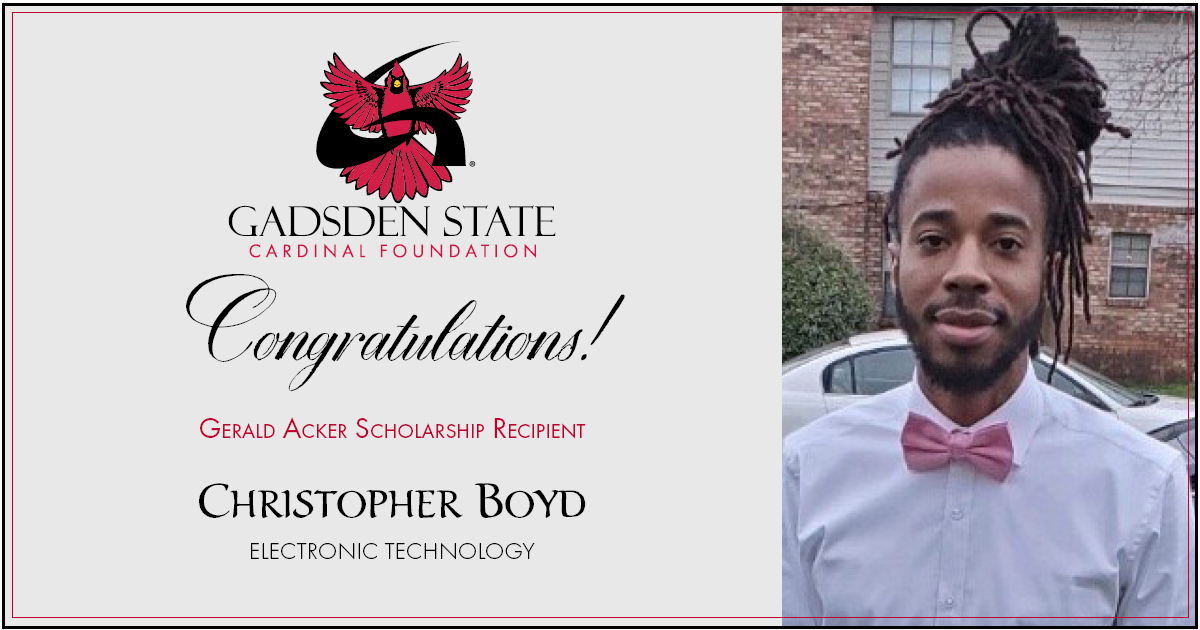 The Michael Scott Hatten Memorial Scholarship is $1,000 and awarded to students taking courses in precision machining. Tesla Wheeler of Oxford is the scholarship recipient. Wheeler is the daughter of Deborah Wheeler. She plans to graduate in the spring 2021 and work at CNC Machine Shop. 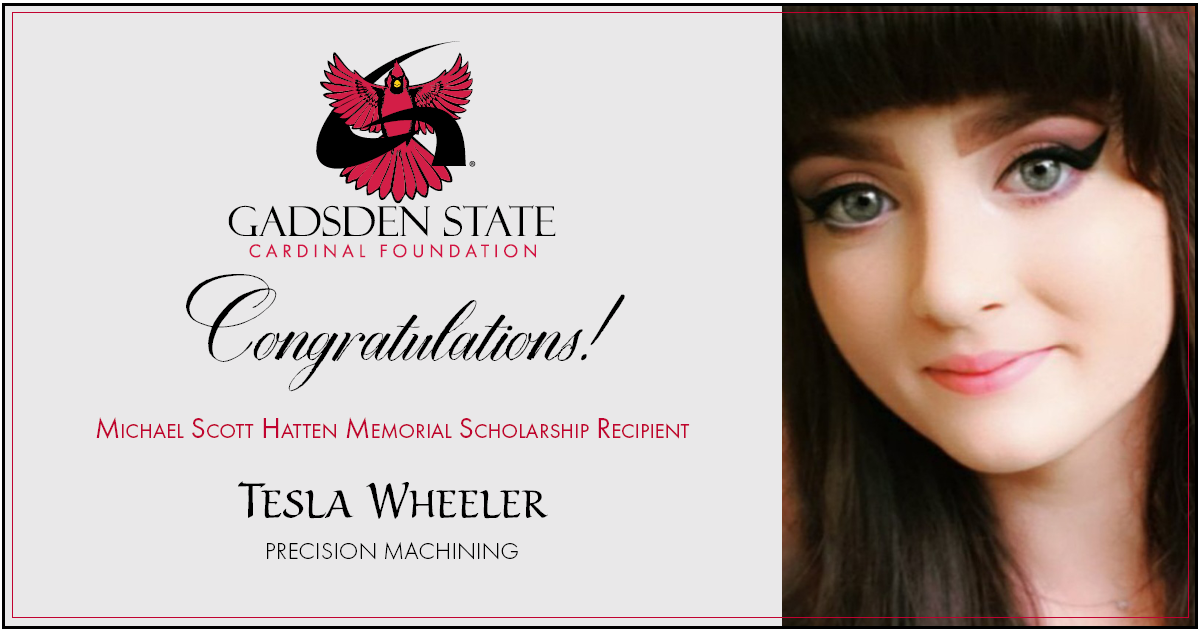 The Swoop Sprint 5K Scholarship is also a $1,500 scholarship and can be used for tuition, books and fees. Jana Croft of Cedar Bluff is the recipient of this scholarship. She is married to Eric and together they have Iris, 2, and Cedar, 9 months. She is majoring in nursing and plans to graduate in the fall 2021.

The Tim & Laura McCartney CTE Scholarship awards three $1,500 scholarships to students majoring in a technical program. Gregory Carnes from Hokes Bluff is one of the recipients of this scholarship. Carnes is the son of Donna Carnes. Carnes is majoring in electrical technology and plans to graduate in December. He hopes to become an electrician after graduation. 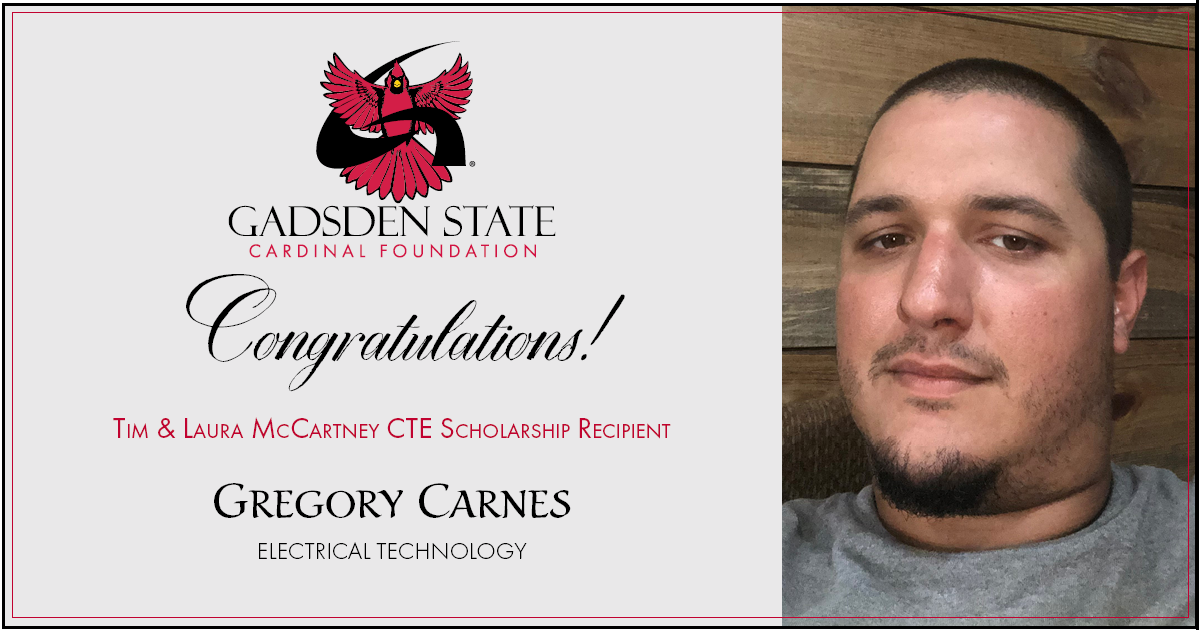 Clay Rainey of Hokes Bluff is also a recipient of the McCartney scholarship. Rainey is the son of Dustin and Leann. He is majoring in electrical technology and plans to graduate in the fall 2022. His career goal is to be a lineman.

Jakeb-Thomas Grayson Mintz is the third McCartney scholarship recipient. Mintz is from Rainbow City. He is the son of Garry and Paige. He is majoring in industrial automation technologies and plans to graduate spring 2022. Mintz hopes to one day work in management. 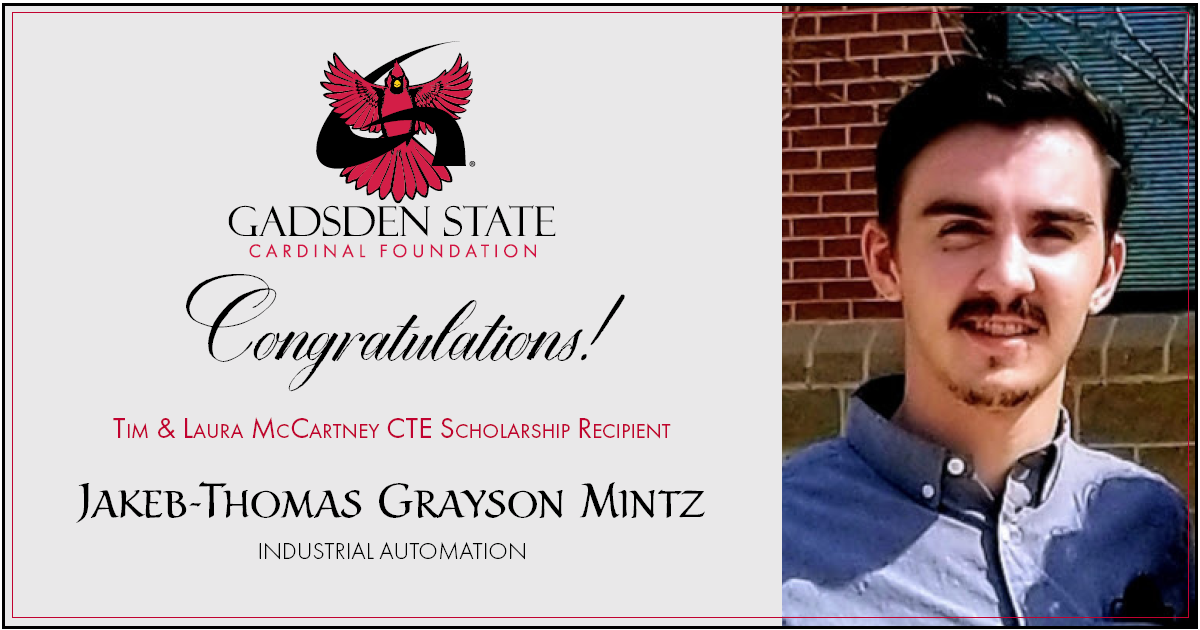 Members of the Board of Directors represent one of the three counties where Gadsden State campuses are located – Etowah, Calhoun and Cherokee counties.