Gadsden, Ala. — Earning a college credential is one of the greatest milestones achieved in a person’s life. A college education can result in a better quality of life thanks to greater success in today’s job market and higher wages. For Cortney Joseph, her college degree from Gadsden State Community College is more than that. It is also proof that she can achieve all things with hard work, dedication and support from family and friends. 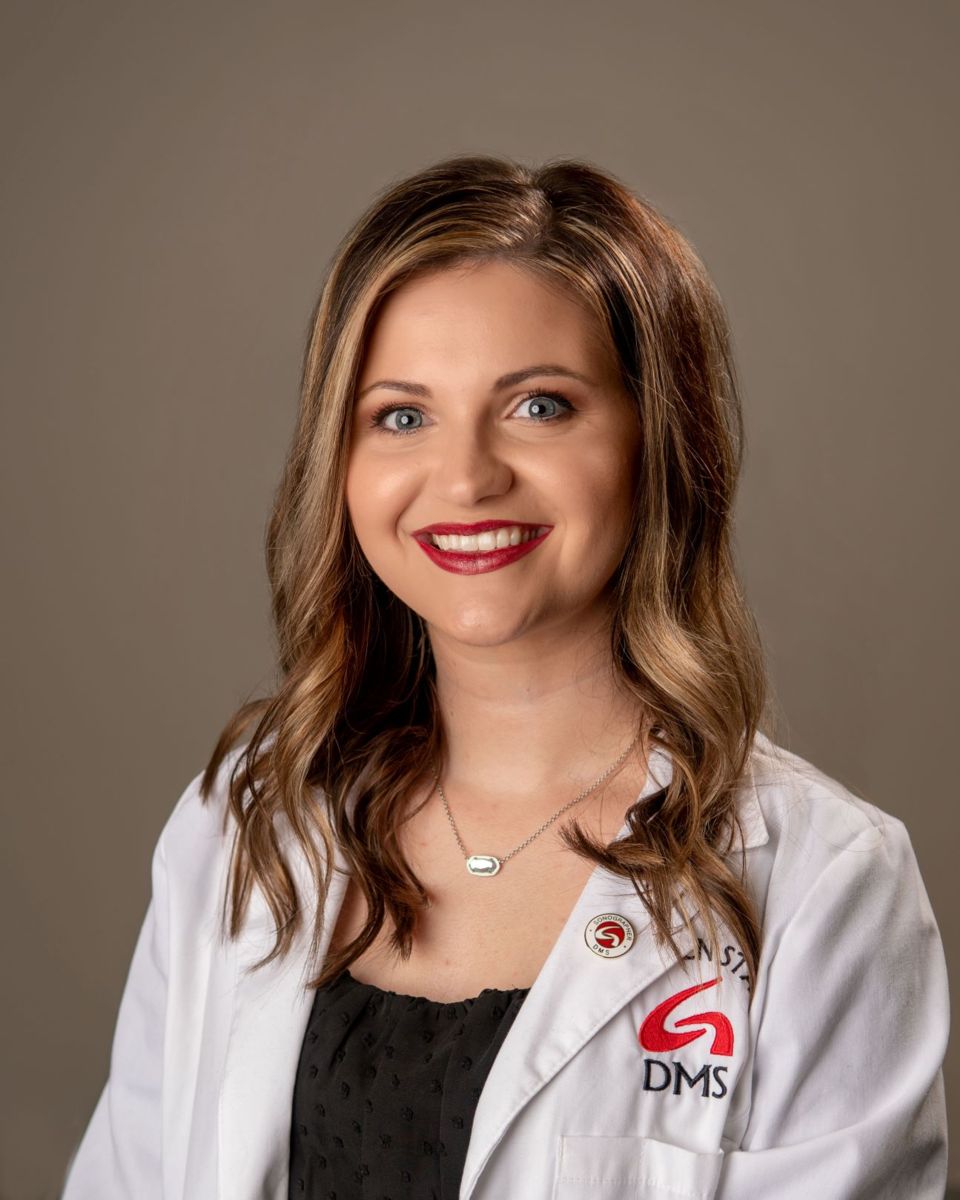 Cortney Joseph is graduating with an Associate in Applied Science in Diagnostic Medical Sonography.

“Walking across that stage to get my diploma is my moment to show that I did this; I succeeded,” she said. “My kids can now see that if they fight hard enough, if they work hard enough, they will achieve their goals.”

Joseph will be among the many graduates to participate in the upcoming Gadsden State Commencement Ceremony at 6 p.m. Dec. 20 at the Gadsden State Cherokee Arena in Centre. She will be one of three student speakers to share their Gadsden State story during the ceremony.

Joseph, who lives in Centre, graduated from Gaylesville High School in 2010. She got married, enrolled in Georgia Highlands College and soon found out she was pregnant. After her daughter Aubree was born, she got a divorce. She said being a single mom who also juggled work and school wasn’t easy.

In 2013, Joseph married her husband, Clay, and was accepted into the nursing program at Georgia Highlands College. When she became pregnant with their son, Parker, she temporarily withdrew from the nursing program just one semester shy of completing requirements to become a registered nurse.

Parker was born in June 2015 with a chromosomal defect and died three months later. This experience left Joseph heartbroken and unwilling to resume her college education.

“I had to take some time to accept what I had just been through before I put myself out there again,” she said. “I wasn’t ready to go back to school.”

She initially wanted to be a part of the Registered Nursing Program at Gadsden State. When that didn’t work out, she decided to take general studies courses.

“I didn’t want to waste my acceptance to Gadsden State so I decided to go ahead and take courses that will one day transfer to a four-year university,” she said.

Joseph enrolled in English 102, history and sociology courses for the 2019 fall semester. She applied to the nursing program for a second time and was rejected again. Far from being defeated, Joseph’s advisor talked to her about applying to the Diagnostic Medical Sonography Program at Gadsden State.

“I researched sonography,” she said. “I talked to my sonographer from when I was pregnant, and she told me that I would be great at it with all I’ve been through myself. I decided to go for it.”

In August 2020, Joseph started the highly-competitive DMS program with 19 other students. She said it would be hard for her to graduate without the support from her classmates.

“When you are placed in a class with 20 people, you all become more than friends. You become like family,” she said. “People outside of our circle don’t understand what we go through as DMS students. It can be chaotic. It can be challenging, but we all pitch in to be there for each other. We wouldn’t be successful if we weren’t looking out for one another. We aren’t out for ourselves in the DMS program. We all want to cross that finish line together.”

Rebecca Southern, the DMS program director, said Joseph has been a model student. She is the president of the Cardinal DMS Society, is an embedded tutor and is a member of Phi Theta Kappa Honors Society. She has also earned the Student of Distinction Award and has remained on the coveted President’s List for a 4.0 GPA she has maintained throughout her time at Gadsden State.

“Cortney embodies the definition of a leader,” she said. “She has a servant’s heart and goes above and beyond for her cohort all while setting an example of excellence. She excels in the classroom and in her hands-on skills.”

Southern called Joseph a “unicorn” for achieving the rare accomplishment in earning certifications from the American Registry for Diagnostic Medical Sonographers in all three modalities – vascular, abdomen and obstetrics/gynecology.

“Each individual credentialing exam takes months of preparation,” Southern said. “Many seasoned sonographers only hold one of these credentials. To obtain three before graduation is an extremely challenging feat; however, it exponentially increases their marketability when job searching.”

Joseph said earning the credentials is certainly something that makes her proud.

“I’m honored to be specialized and registered in all three modalities,” she said. “It was certainly an accomplishment I worked very hard for. I had to know everything about each modality, so I had to know all about the signs, symptoms, labs and pathology in vascular, abdomen and OB/GYN.”

Joseph said she studied a lot for the credentialing exams in addition to attending class, being a wife and mother and completing clinicals in Birmingham and Rome, Ga.

“I studied day-in and day-out,” she said. “I was very focused on those exams, and it was all worth it.”

She gives thanks to Clay for helping her achieve her goals.

“It has been hard on my husband,” Joseph said. “He really stepped up and took care of everything from picking them up at the end of the school day to doing homework to cooking dinner. Plus, he worked full time. It was tough but we made it through.”

Joseph has already secured a job as a sonographer at the Redmond Regional Medical Center in Rome, Ga. Her projected start date is Jan. 7. But, first, she’s focused on graduation.

“I am so excited about graduation,” she said. “It is a testament that I am no longer a college drop-out. I faced rejection twice and I still made it out of Gadsden State with a degree. I have achieved my dream. I did it!” 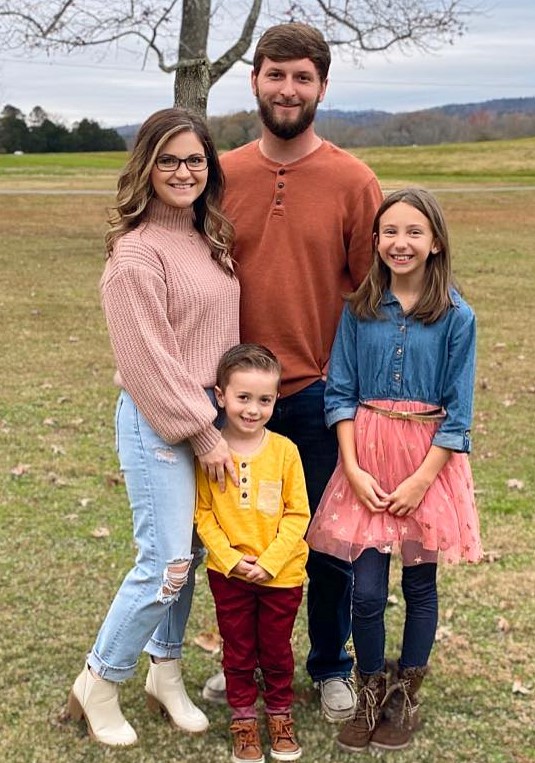 Cortney Joseph is pictured with her family – children, Cooper, 5, and Aubree, 10; and husband, Clay. Joseph will receive an Associate in Applied Science at Gadsden State’s upcoming commencement ceremony.

Other commencement speakers are William Wiggins of Rome, Ga., and Brandon Griffin of Anniston.

Wiggins is earning his degree in Registered Nursing from Gadsden State. He attended classes at Gadsden State Cherokee and is graduating with a 3.27 GPA. Previously, he earned a bachelor’s degree from Shorter University in Secondary English Education and spent five years teaching English at Coosa High School before deciding to change careers. He is the married father of five children.

Griffin is a student at the Ayers Campus and will graduate with an Associate in Applied Science in Marketing Management. A graduate of Seneca Valley High School in Germantown, Maryland, Griffin enjoys radio broadcasting, podcasting and cybersecurity.

The grand marshal of the commencement ceremony will be Michele Conger, retiring director of the Ayers Campus. Graduates will be presented by Alan Wallace, dean of Information Technology Services, and Alan Smith, dean of Workforce Development. Diplomas will be awarded by Dr. Kathy Murphy, president.