Gadsden, Ala. — Several capital improvement projects have been completed with many other projects underway or in the planning stages at Gadsden State Community College. Over $17 million total will be spent on all projects planned through the end of 2022.

“Our students are the main priority for our faculty, staff and administration,” said Dr. Kathy Murphy, Gadsden State’s president. “Aging buildings can pose a risk to student health and safety so it’s our responsibility to initiate serious updates to our infrastructure as much as possible. Our students deserve to be educated in a comfortable environment that nurtures and promotes learning.”

Since 2020, $2,987,975 has been spent on capital and public works projects on four of Gadsden State’s five campuses. Projects in progress and those that will get underway this year total an additional $14,381,533. Murphy said the College is utilizing federal COVID relief dollars as well as tax revenues from Etowah County to fund the projects.

“For several years, these projects have been delayed due to the lack of funding,” she said. “When it was determined that replacing or upgrading HVAC units and renovating existing buildings were acceptable, we put together a master plan to ensure that we are addressing the most pressing issues on our campuses.”

“Those facilities were aging and were very expensive to maintain,” Murphy said. “We no longer needed Browder Hall, which housed our science programs, with the completion of the Science Building on the East Broad Campus in late-2019. Mitchell Hall had not been occupied in years, and the Realtime Reporting Program was moved to a more suitable location on the East Broad Campus.”

Repairs and new installation of flooring at all campuses took place in 2021 as well as the installation of water bottle filling stations. Other completed projects include renovated storage units, restriped parking lot and updated signage at the Valley Street Campus; remodeled resource center and repaired leaking water main and storm drainage at the East Broad Campus; and improvements made to the second floor of Allen Hall at the Wallace Drive Campus.

Projects currently underway or in the planning stages on three of Gadsden State’s campuses include:

Ayers Campus: Repaving parking lots; lowering the roof at the Cain Learning Resource Center; constructing outdoor classrooms for students in Diesel Mechanics and Welding; and installing a generator at the Administration Building 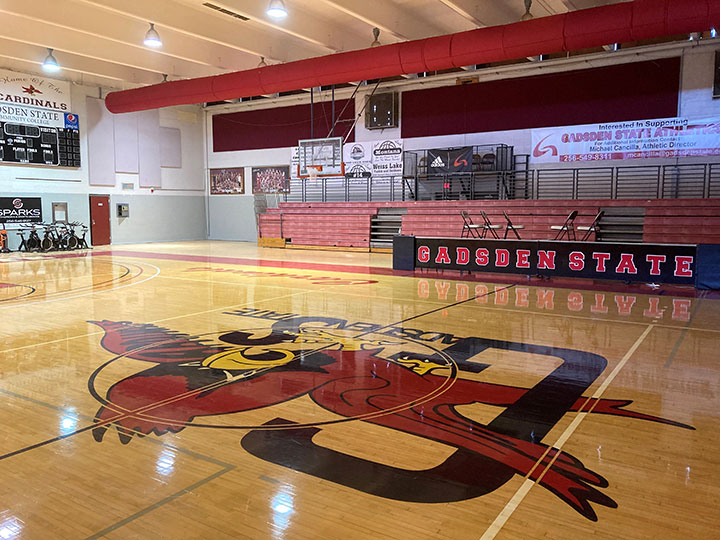 HVAC has been installed in the Gadsden State gym.

“We are so excited about the installation of HVAC in Beck Field House, which is our gymnasium,” Murphy said. “Since its construction, our athletes and fans have had to endure the heat and the cold while participating in sporting events. Now they will be comfortable since we can control the climate indoors.”

She pointed out that projects are necessary because of the age of the facilities at Gadsden State.

“Gadsden State has been educating and training the people of northeast Alabama for many decades beginning in 1925 with the founding of the Alabama School of Trades, which is now our East Broad Campus,” she said. “The Valley Street Campus was established in 1960, the Wallace Drive Campus in 1965 and the Ayers Campus in 1966. The ages of the facilities make it necessary for us to focus our maintenance, renovation and repair efforts on these campuses.”

Murphy said other projects are being considered or are in the approval process.

“As we make changes and improvements, we will notify our students, employees and community,” she said. “We plan to see continuous improvement in our facilities and infrastructure.”