Gadsden, Ala. — Gadsden State Community College will field baseball and softball teams beginning in Fall 2023. The announcement was made today by Dr. Kathy Murphy, president, during a community meeting at the Beck Field House on the Wallace Drive Campus. The meeting was attended by graduates, former student-athletes, community leaders, Gadsden State employees, alumni and students.

“I am beyond delighted to announce today that we are reinstating the baseball and softball programs at Gadsden State,” she said. “We believe this is a good way to recruit, enroll, retain and support students. We are providing them a good collegiate experience.”

The baseball and softball teams were disbanded at Gadsden State in 2011 and 2016, respectively.

Murphy said the decision to reinstate the programs came after a Jan. 20 community meeting was held to gage public interest. A committee of local supporters, including former Gadsden State student-athletes, was convened to discuss and research the possibility of the reinstatements. 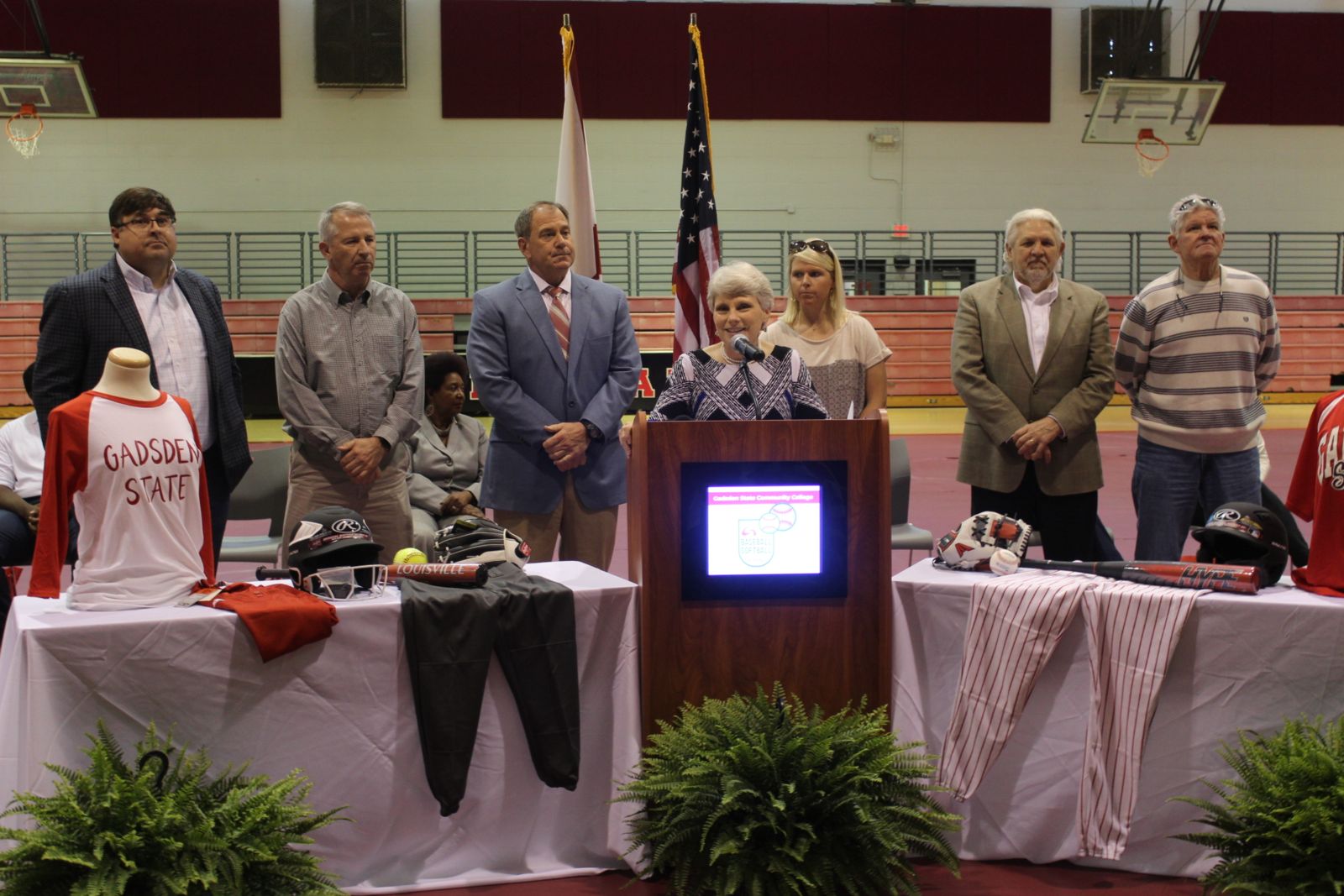 Dr. Kathy Murphy, middle, announces the reinstatement of the baseball and softball programs at Gadsden State. She is joined by some of the members of the Reinstatement Committee, from left, Kyle Reeves, Mike Robertson, Craig Ford, Courtney Brothers, Steve Hildebrant and Hugh Stump.

“It’s a great day in the neighborhood,” she said. “We support sports. If we don’t have sports, we don’t have a school. We truly support Gadsden State, and we will do everything we can to bring more visibility to our College. We value our partnership.”

Baseball and softball are not the only recent additions to the Gadsden State Athletics Department. Murphy announced the reinstatement of cross country in September. The cross country team was eliminated following the Fall 2011 season.

“Not everyone will agree with us on investing in sports but that’s OK. They can be wrong,” Murphy said. “We need our community to come forward and support our Athletic Department. We need to see your faces when the bats are cracking.”

“At Gadsden State, I have learned from supportive and knowledgeable instructors, grew under the leadership of strong female coaches and developed friendships with some of the best athletes in our region,” she said.

In addition to a positive collegiate experience, more area student-athletes will be able to expand their athletic careers beyond high school, Peterson said.

“As student-athletes at Gadsden State, we are given the opportunity to adjust to a less-intimidating environment while perfecting our athletic skills and earning a solid education,” she said. “We are becoming better athletes and better students thanks to our time at Gadsden State.”

Kyle Reeves, who played on the Cardinals baseball team in 1998 and 1999, served on the Baseball/Softball Reinstatement Committee.

“I enjoyed being involved on the committee, and I’m excited that baseball and softball are coming back to Gadsden State,” he said. “We have a president that values athletics and values what athletics can do for the community.”

Mandy Martin is a former softball player from 2005 to 2007. She said she wants other student-athletes to have the same positive experience at Gadsden State that she had.

Murphy said the College will soon hire an athletic director, who will also serve as a coach. The head coaches for softball and baseball will spend the 2022-23 academic year purchasing equipment and recruiting players and assistant coaches.

Murphy said the coaches will decide what equipment is needed for their respective team, but she knows there will be a substantial upstart investment. Besides equipment, Gadsden State will have to fund the salaries of coaches, scholarships for players, paying umpires, traveling to games and insurance.

“This is a big undertaking financially,” she said. “It’s expensive but, like Babe Ruth said, ‘Never let the fear of striking out, keep you from playing the game.’ We are stepping forward to do what we think is best for our students and for our community. We can’t be afraid of striking out.”

The Cardinal Foundation is accepting financial donations to be used for expenses incurred by the reinstatement of baseball and softball. The Cardinal Foundation is an organization established to raise, manage, distribute and steward private resources to support the mission of Gadsden State. It is governed by a board of directors led by Mark Condra, president. For more information, please contact Jackie Brehm Edmondson, director of Public Relations and Marketing, at 256-549-8224 or jedmondson@gadsdenstate.edu.

Dr. Aletta Williamson, dean of Enrollment and Retention, provided comments regarding the benefits of the baseball and softball programs on enrollment and recruitment at Gadsden State:

“Athletics is a valuable aspect of the collegiate experience. Many traditional aged (18-24) students are attracted to colleges for nonacademic reasons; sports are often one of those reasons. Some college students want or need to feel a sense of connection. Often, sports are a way to cultivate this relationship; which in turn, provides students with a sense of belonging and leads to increased retention.

Expanding our athletic programs by adding softball and baseball will aid in promoting additional school spirit and unity. Hopefully, these programs will attract not only the players but will also create meaningful relationships with their families, coaches, high schools and communities.  Ultimately, this opens additional avenues for enhancing our recruitment efforts and increasing our overall enrollment.”